Duration of the project:  since August 2020

This project began in August 2020, while I was stil working for Rokit Studios. At the beginning, it should have only been for Android phones, but it went through several changes: it went form Android phones, to Windows-only, then back to Android phones only, with the enconomic model of a pay-to-play.. The current iteration of this game is for Android phones and PC as a free-to play.
In its current state, the games has several gamemodes; 2 solo modes and 3 multiplayer modes: 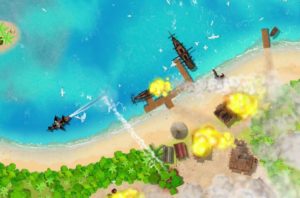 When this game began, I was the only programmer on the team, so I did every programming aspects, from programming the gameplay loops to creating and programmin the user interfaces.
When another programmer came in, I was able to shift my focus to create small scripts that would give life to the world of this game : for exemple, creating NPCs that would populate the world and the player could interact with them, or even creating monsters that would one-shot kill the player if he went out of the map.

You can also go to the Starsheep Studio website to learn more about RobZ and the other projects.